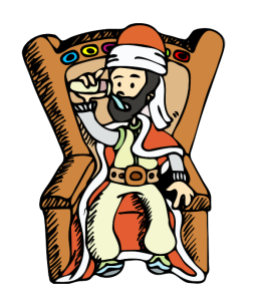 What is a throne (Turkish: Arş, Arabic: عرش “Arsh”) in the Risale-i Nur collection? Before defining this term, let us recall the standard definition of a throne. A throne, according thefreedictionary.com [1], is “A chair occupied, as by a monarch or prelate, as a mark of rank or distinction on state or ceremonial occasions, often situated on a dais and sometimes having a canopy and ornate decoration.” A throne is thus a setting which displays the power and the rank of a ruler. In other words, it displays the attributes which are associated to a ruler or a monarch (power, wealth, …etc).

So what does it mean in the Risale-i Nur collection? A throne is a setting which displays the names and attributes of God before our eyes. As seen in The Second Station of the Fourteenth Flash Part 1 and Appendix A, God’s names are being manifested in many different ways in this universe. A scholar, for instance, is (in a sense) a throne; since the name Al-Alim (The All-Knowing) is being manifested or displayed. A flower is a throne, since the name Al-Jameel (The All-Beautiful) is being manifested. In other words, we can see the different names of God being manifested in the world, and every setting where these names are manifested is considered to be (in a sense) a throne. Every throne shows the attributes of God

In the twenty fourth letter, the author states

The sun is greatly close to us by means of the mirror within our hands, and every transparent object on the ground becomes a sort of a throne for it and a kind of a residence. (Second Addendum of The Twenty Fourth Letter, Fourth Point)

Hence a mirror is, in a sense, a “throne” for the sun. That is, the properties and “attributes” of the sun are displayed to us through the mirror. The author describes the definition of a throne through the analogy of the sun’s reflection in transparent things,

For instance: Just as a drop of water, an infinitesimal piece of glass, while they are in themselves lightless and insignificant; if they turn their face towards the sun with their pure heart, then that insignificant lightless drop and piece of glass will become a sort of a throne of the sun and smile at you.

As in this analogy, through their being a mirror from the standpoint of their duties to names the One of Glory, the possessor of absolute beauty and absolute perfection; infinitesimal specks of beings, like that drop and infinitesimal speck of glass, rise from a very shallow level to a very high level of appearance and illumination. (The Seventeenth Flash, The Eighth Note)

Finally, the following examples are provided to clarify the definition,

While the above definition is used in many parts of the Risale-i Nur Collection, it is crucial to realize that the word throne is sometimes used to mean the usual/standard definition. Hence, one needs to examine the content to determine which definition is being used.