Oh brother! You have asked me for a couple [words of] advice. Since you are a soldier, listen along with me to eight short stories of a military nature and to a few truths. For I see my soul (nafs), more than anybody else, in need of advice. I had once spoken to myself of the “eight words” inspired by eight verses [of the Qur’an] in a lengthy manner. Now I will address them to myself in a short form in the language of laity.Whoever desires may listen with me.

Bismillah, “In the name of Allah” is the beginning of every goodness. We too begin with it. Know oh my soul (nafs[7])! Just as that blessed word is a mark of Islam, it is also a phrase continuously uttered by the tongue of disposition of all beings. If you want to know what a great inexhaustible power, what a never-ending blessing is Bismillah; [then] observe and listen to this short allegory. It goes like this:

For a man traveling in the Bedouin deserts of Arabia, it is crucial to take the name of a tribe leader and enter under his protection. Thereby, he can escape the dangers of mobsters and attain his necessities. Otherwise, he will suffer greatly on his own against the countless enemies and needs. For a journey of this kind, two men went to the desert. One of them was humble. The other proud. The humble one took the name of a tribe leader. The proud man did not…The [former] who took the name traveled everywhere in safety. When confronted by a mobster, he would say “I am traveling in the name of such-and-such tribe leader”. The mobster would [thus] leave and not do [any] harm. Upon entering a tent, he would be respected by virtue of that name. The other proud man [in contrast] encountered such adversity [that it is] indescribable. He continuously trembled [before everything], and constantly begged [from everybody]. He was both mortified and abased.

Oh my proud soul! You are the traveler. This world, on the other hand, is a desert. Your impotence and poverty are boundless. [While] your enemies and needs are endless. As this is the case, take the name of the Pre-eternal Owner and the Post-Eternal Ruler of this desert, [and] thus be saved from begging the whole universe and trembling before every event.

Yes, this phrase is such a blessed treasure that your endless impotence and poverty bond you to an endless power and mercy, making weakness and poverty a most acceptable intermediary before the door of the Powerful Compassionate One. Indeed, the person who acts by this phrase resembles a man who enrolls in the army. He acts in the name of the government. He no longer fears anybody. He declares the name of the law and the name of the government, [and thus] he performs every duty and resists against every obstacle.

In the beginning we said: All beings say “In the name of Allah” (Bismillah) by their tongue of disposition. Is that so?

Indeed, if you [were to] observe that a single man came, drove all the city inhabitants to someplace and forced them to work on [certain] tasks; you would know for certain that the man is not acting in his own name [or] by his own power. Perhaps he is a soldier. He acts in the name of the government. He depends on the power of a monarch. Similarly, every being acts in the name of The Almighty Truth[8] (Janab Al-Haqq), so that the tiny particle-like grains and seeds [are able to] carry enormous trees over their heads[9], lifting loads like that of a mountain. Hence, every tree says Bismillah, filling its hands with fruits from the treasure of mercy, and peddling them to us. Every garden says Bismillah, becoming a cauldron for the kitchen of [Godly] power, [where] a numerous variety of diverse delightful foods are being cooked together. All blessed animals such as a cow, camel, sheep, or goat say Bismillah; becoming a fountain of milk from the opulence of mercy. They present to us, in the name of the Provider (Ar-Razzaq), the most elegant and pure [of all] nourishment, resembling the water of life. The roots and vessels -soft as silk- of every plant, tree, and grass say Bismillah, and break through the hard rock and earth. They say “in the name of Allah”, “in the name of the Merciful One (Rahman)”, and everything becomes subjected to them. Indeed, the perfect ease of the roots in the hard rock and earth spreading and giving fruit underground, just as the branches spread [easily] in the air and produce fruit; and the [fact that] elegant green leaves stay moist for months against the intense heat; slap fiercely at the mouth of Naturalists, jab a finger at their –may it turn blind– eye, and say “Even hardness and heat which you trust the most act under the command of law; so that the vessels, soft as silk, each like the staff of Moses (Musa) (AS) complies to the command “[10]  فَقُلْنَا اضْرِبْ بِعَصَاكَ الْحَجَرَ” cracking open the [solid] rocks. And those fragile leaves as thin as cigarette paper, each like the limbs of Abraham (Ibrahim) (AS) recite the verse “[11]  يَا نَارُ كُونِي بَرْدًا وَسَلَامًا” against the flaming heat.

Question: We give a price to people in the form of peddlers. What price does Allah, The True Owner, ask for?

Answer: Yes, that True Granter of blessings asks for three [things] from us in exchange as a price for those precious blessings: one is remembrance (dhikr), one is Thanks (shukr), [and] one is reflection (fikr). [Saying] “In the Name of Allah” (Bismillah) in the beginning is remembrance (dhikr). [and] “All Praise be to Allah” (Alhamdulillah) at the end is thanks (shukr). In between, to think and understand that these blessings of priceless incredible creativity are the miracles of power and the gifts of mercy of The One (Ahad) and The Self-Sufficient (Samad) is reflection (fikr). To what degree of foolishness it is to kiss the feet of a piteous man bringing to you a valuable gift of a ruler, failing to realize the [true] owner of the gift; it is a thousand times of greater foolishness to love and praise the superficial granters of blessings, forgetting the True Granter of blessings.

[1] In the name of Allah, the Merciful, the Compassionate

[3] All praise be to Allah, the Lord of the worlds, and peace and blessings be upon our Master Muhammad and on all His family and companions.

[4] Sheikh-hood refers to the Sufi tariqas (mystic orders). These tariqas usually have a Sheikh (a spiritual guide) who leads members of the order and, in a sense, is in the position of a father to them. Unlike the Arabic language, the term sheikh in Turkish is used exclusively for a spiritual guide in a certain tariqa. Here, the author describes how the way of the Risale-i Nur differs from that of the tariqas so as not to wound the pride of the nowadays corrupted society. – TN (Translator’s Note)

[5] The original language of this book is Turkish. However, Turkish contains many words that were originally Arabic (like the word nafs to be discussed soon) and were later incorporated into the Turkish language.

[7] An aspect of the self or the soul which directs people to evil. Sometimes used for the self as a whole instead of only the evil aspect of it.

[8] Al-Haqq (meaning The Truth) is one of the names of Allah (ﷻ). So “The Almighty Truth” is similar to saying “The Almighty God”. –TN

[9] To “carry enormous trees over their heads” means to carry the potential of growing into an enormous tree. –TN

Who is Bediuzzaman Said Nursi? 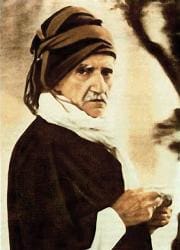